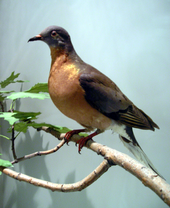 Passenger Pigeon: From World’s most abundant bird to extinct in less than 100 years.

Some claim that burning fossil fuels is the most devastating damage humans have done to our earth. That’s one opinion, but it is clearly not the longest lasting harm.

While burning fossil fuels certainly causes major harms including creating the most deadly cancer causing compound (from diesel engines), after a few tens of thousands of years even the most potent parts of that pollution will have transformed into far less harmful chemicals. And if humans are still around they’ll likely use electric vehicles.

Some poets say love is forever. It may feel that way. However, genuine forever-ness is the loss of an endangered species; not unlike the permanent loss we realize when one of our parents dies.

Sea Otters: Teetering on the Brink of Extinction

We killed the last passenger pigeon just a few years ago – that is wholly un-reversible. They are never coming back. Yet in the lifetimes of our grandparents they were probably the most animal species in the 1800s. One flock was a mile wide and some 300 miles long ! It took 14 hours to fly past.

Extinction, is the most devastating damage Americans have wrought, and our local politicians are hell bent on causing even more.